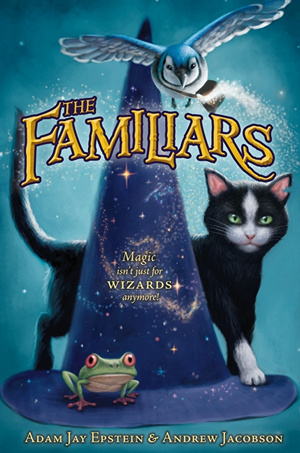 “Translated into 14 different languages around the world.”

When Aldwyn, a young alley cat on the run, ducks into a mysterious pet shop, he doesn’t expect his life to change. But that’s exactly what happens when Jack, a young wizard, picks Aldwyn to be his magical familiar.

Finally off the tough streets, Aldwyn thinks he’s got it made. He just has to convince the other familiars—the know-it-all blue jay Skylar and the friendly tree frog Gilbert—that he’s the telekinetic cat he claims to be. But when Jack and two other wizards in training are captured by a terrible evil, it will take all of Aldwyn’s street smarts, a few good friends, and a nose for adventure to save the day!

“What a great idea for a book! I’ll be checking it out.”
Rick Riordan, author of “Percy Jackson and the Olympians”

“The consistently suspenseful narrative moves quickly and is full of twists and turns. This winning combination of action and humor will keep readers turning pages right up to the end.”
School Library Journal (starred review)

“Screenwriters Epstein and Jacobson’s children’s book debut is a grand adventure with entertaining characters and magic-induced fun, written in an appropriately cinematic style. Even adults will appreciate a tale in which street smarts mix with book learning, and resourcefulness and confidence are matched by loyalty and respect.”
Publisher’s Weekly

“The Familiars combines the magic of Harry Potter and the adventure of Warriors into a enchanting story readers will love. Whether furry, flippered, or feathered, you’ll be taking a closer look at your family pet.”
Michael Buckley, author of The Sisters Grimm and NERDS